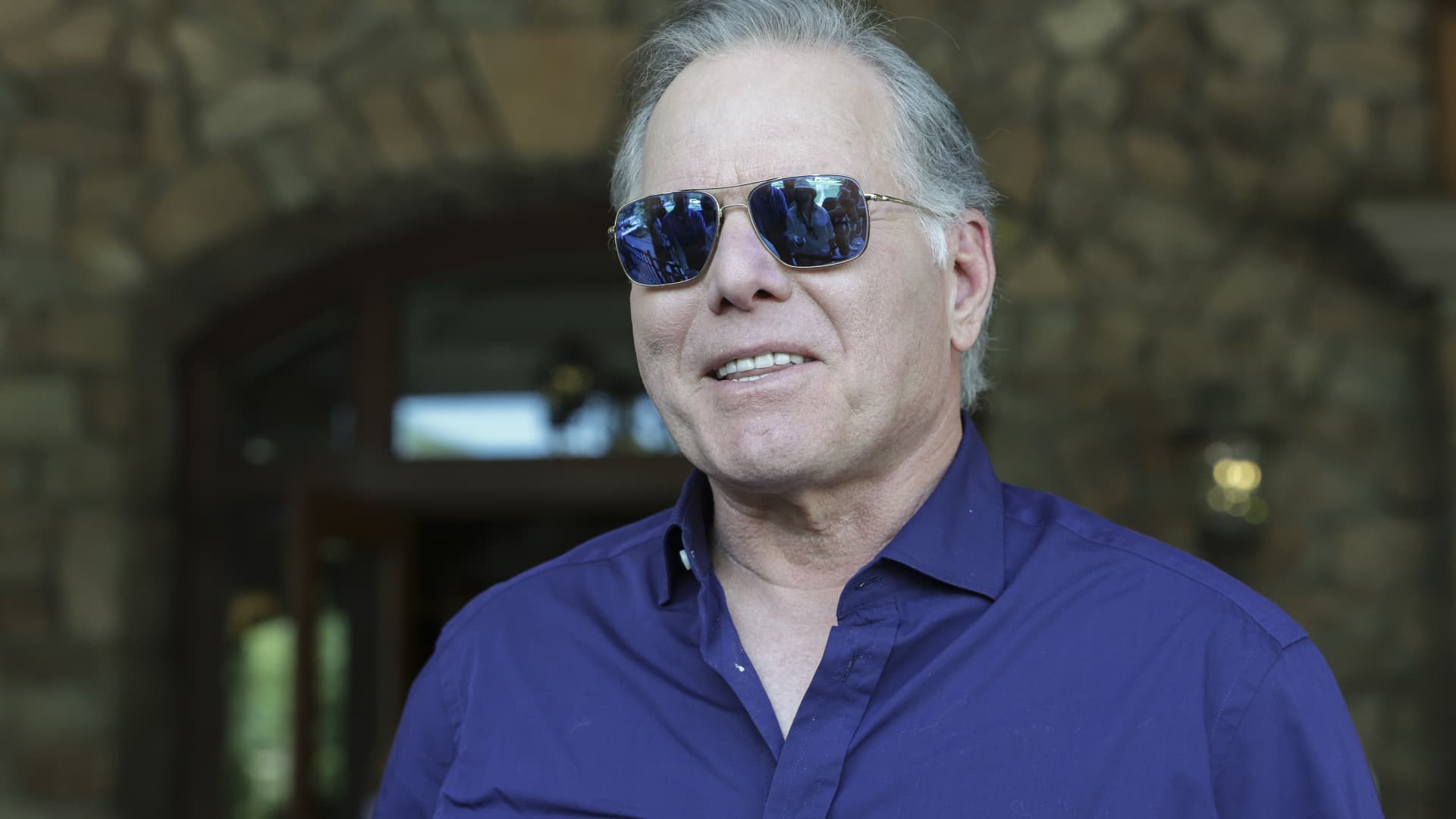 David Zaslav, President and CEO of Warner Bros. Discovery talks to the media as he arrives at the Sun Valley Resort for the Allen & Company Sun Valley Conference on July 05, 2022 in Sun Valley, Idaho.

The biggest decision for any big media chief executive officer is how much to lean in to the future.

Unlike previous WarnerMedia CEO Jason Kilar, who centered the company around HBO Max, Zaslav is pulling back from a streaming-first mindset to keep his company’s theatrical and traditional pay-TV businesses going as long as possible.

Zaslav on Thursday reiterated his stance that Warner Bros. Discovery isn’t going to approach the streaming wars as a race to win the most subscribers. His comments come as Netflix has lost more than 60% of its value in the past year after subscriber growth stopped for the first time in a decade, causing media and entertainment companies to rethink their streaming strategies.

Warner Bros. Discovery formally announced it will release a combined HBO Max-Discovery+ product in the U.S. by mid-2023, and develop a free, ad-supported option for the service. The company set a target of 130 million global subscribers by 2025. That’s about 40 million more customers than subscribe to HBO Max and Discovery+ today, but still a far cry from the 221 million subscribers that pay for Netflix worldwide.

Zaslav made a point to say he is a believer in both movie theater releases and the longevity of traditional TV as “a cash generator and a great business for us for many years to come” during his company’s second-quarter earnings conference call on Thursday.

But he’s also committed to spending “significantly more” on HBO Max and adding Discovery programming to the streaming service.

Kilar made waves during the pandemic by deciding to put his entire 2021 film slate on HBO Max at the same time movies hit theaters. While that turned out to be a temporary move, Kilar later stood by the decision as simply the first to shift.

“History is already looking at it quite favorably,” Kilar said in an April interview with Deadline. “It worked. We were the first over the wall.”

Zaslav on Thursday, in stark contrast, made a point to emphasize the importance of theatrical release for big-budget movies by scrapping “Batgirl” this week, which Kilar had ticketed to launch directly on HBO Max. Launching expensive movies directly to streaming doesn’t make economic sense, Zaslav said. “Batgirl” cost $90 million to make.

“Our conclusion is expensive direct-to-streaming movies, in terms of how people are consuming them on the platform, how often people buy a service for them, how they get nourished over time, is no comparison to what happens when you launch a film in the theaters,” Zaslav said. “This idea of expensive films going direct to streaming, we can’t find an economic value for it, and so we’re making a strategic shift.”

It’s not Zaslav’s first reset during his tenure.

Kilar also pushed the launch of CNN+, a $300 million effort to give CNN a digital streaming strategy. Similar to “Batgirl,” Zaslav decided to kill the streaming service before it got a chance to prove itself as successful.

Zaslav said Thursday he believed the strength of live news is on traditional pay-TV rather than streaming. That suggests CNN live programming won’t be going to the HBO Max/Discovery+ product when it launches, or any time soon.

“We see live news as critical to the linear pay-TV service,” Zaslav said.

Choosing to push HBO Max while also trying to slow the decline of box office and linear pay-TV is a juggling act. But it’s also the plight of the modern media CEO. Moving too far into the future cannibalizes cash-flow positive businesses.

It may not be strategically clean. But it’s the hand Zaslav is choosing to play.

“I’ve been around a long time,” Zaslav said, adding that he “hung around” with former General Electric CEO Jack Welch when he ran NBCUniversal, where Zaslav worked. “Broadcast was dead in the ’90s, or that’s what people said. But in the end, that reach and the ability to drive advertising product was what kept it alive. We’re big believers [in overall reach] and we think that’s going to help us.”

Disclosure: CNBC is part of NBCUniversal.