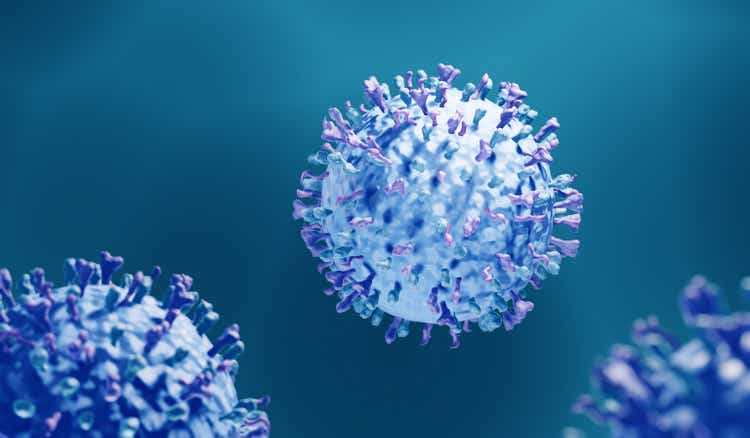 Pfizer (NYSE:PFE) made a major step forward last week to access a market opportunity worth more than $10B for RSV vaccines as the pharma major seeks to replicate a pandemic-era business model against another infectious disease with a large unmet medical need.

Announcing data from a global Phase 3 trial, Pfizer (PFE) said Thursday that its experimental bivalent vaccine candidate for the respiratory syncytial virus (RSV) RSVpreF led to an ~86% of efficacy against severe disease in those aged 60 years and older.

Unmet medical need: Each year, RSV infection causes about 177K hospitalizations among older adults in the U.S., out of which 14K end in death, data from the Centers for Disease Control and Prevention (CDC) indicate. A common childhood infection that can lead to mild illness, RSV can be severe and cause death among infants and older adults.

No vaccines are available to prevent RSV infection, and only a monoclonal antibody called Synagis can cut the risk of severe disease in high-risk infants.

With plans to pursue regulatory approval for RSVpreF as early as this fall, PFE becomes a front runner to own a piece of the market which SVB Leerink projected last year could reach up to $10.5B by 2030.

However, the market for RSV vaccines is getting crowded, with the likes of GSK (GSK) and Johnson & Johnson (JNJ) also in the fray.

Two-pronged approach: With strategies to address both the preventative and curative side of RSV, Pfizer (PFE) stands out from its rivals. A similar model applied during the pandemic with its blockbuster COVID-19 vaccine and tablet Paxlovid is projected to add more than $50B in revenue for the company in 2022.

In April, PFE agreed to acquire ReViral for up to $525M, forecasting more than $1.5B in revenue from the private firm’s RSV programs, including an oral antiviral. At the time, the RSV agent named sisunatovir was undergoing a Phase 2 human challenge study in healthy adults and a Phase 2 study in infants.

Race for RSV vaccines: Signs of fast-moving developments are emerging in the RSV space as major drugmakers are racing to own a piece of the multi-billion-dollar opportunity.

Citing data from the Phase 3 trial, GSK (GSK) said in June that its RSV vaccine candidate RSVPreF3 OA was the first to show statistically significant and clinically meaningful efficacy in those aged 60 and above. However, as the U.K. drugmaker has yet to disclose detailed results, a comparison with Pfizer’s (PFE) remains difficult.

Meanwhile, in the coming months, the Janssen unit of JNJ (JNJ) expects to post data from a global Phase 3 trial designed to test its RSV vaccine candidate in about 23,000 adults aged 60 years and older. A Phase 2 readout from a study involving 5,700 individuals pegged its efficacy at 80% among individuals aged 65 and above.

Moderna (MRNA) is also developing a messenger-RNA-based RSV vaccine called mRNA-1345 based on the technology used in its blockbuster COVID shot. Its Phase 3 trial involving older adults and a Phase 1 trial for children is currently underway.

Market estimates: Following the launch of PFE’s Phase 3 trial for RSVpreF last year, SVB’s Geoffrey Porges projected the company to capture $2.1B of the RSV vaccine market by 2030, trailing $2.9B estimated for GSK and ahead of $1.7B expected for JNJ.

He also projected a $2.6B worth of market share for other drug and vaccine developers for RSV, such as Bavarian Nordic (OTCPK:BVNKF) (OTCPK:BVNRY) and MRNA.

Leading vaccine maker Sanofi (SNY) (OTCPK:SNYNF), which has partnered with AstraZeneca (SVB) to develop a long-acting antibody nirsevimab to protect infants from RSV, is expected to take up $2.6B of the overall market, Porges forecasted at the time.

However, Porges’ projections indicate that the opportunity for infants could make up only 18% of the RSV vaccine market in 2030, well below 72% for adults.

Yet, vaccine makers are undeterred; early this month, Sanofi (SNY) announced that enrollment started in a Phase 3 randomized open-label study designed to assess nirsevimab in preventing RSV-related hospitalizations in infants under 12 months.