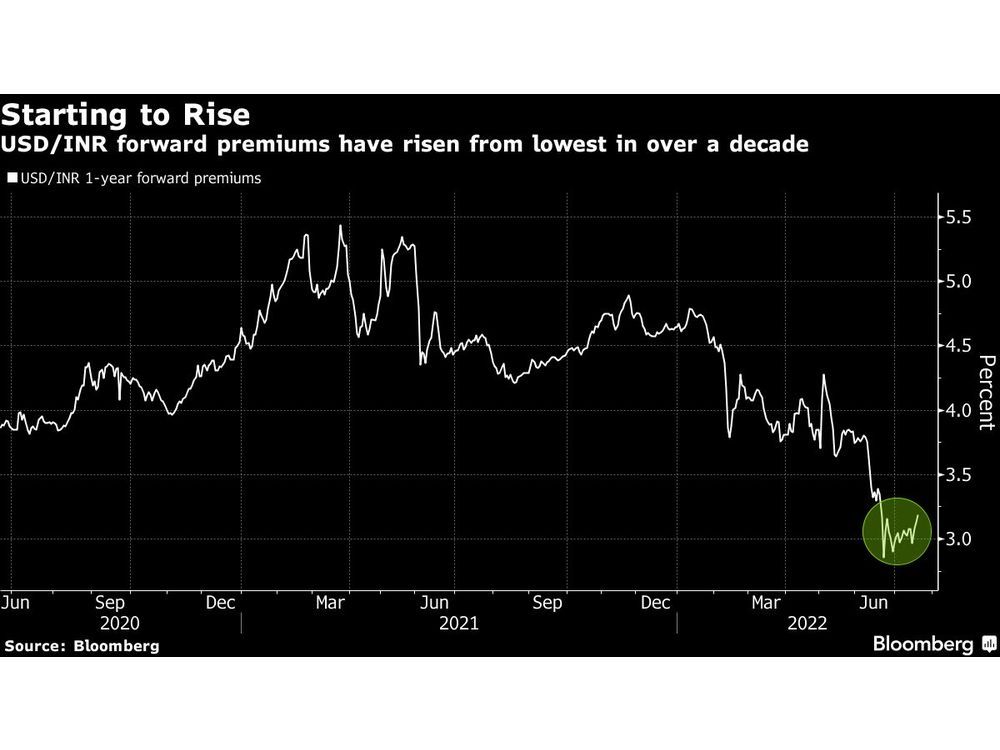 (Bloomberg) — Indian companies are rushing to hedge their overseas dollar debt against further declines in the rupee, a process that threatens to cascade into additional losses for the battered local currency.

The nation’s firms had $79 billion of unhedged offshore loans at the end of March, about 44% of their total overseas borrowings, according to the latest data from the Reserve Bank of India. The cost of repaying that has been soaring as the rupee has tumbled more than 7% this year.

“We have seen increased activity among corporates to hedge their dollar exposure ever since USD/INR broke above 79,” said Parul Mittal Sinha, head of India financial markets at Standard Chartered Plc in Mumbai. “The proportion that is dollar hedged is expected to increase in the current risk-off environment, increasing dollar demand.”

The proportion of unhedged foreign loans has built up as companies were lulled into complacency about their dollar exposure by RBI’s intervention, which ensured the rupee was less volatile than its emerging-market peers. In recent months however, stock outflows and broad dollar strength has seen the currency’s losses accelerate and sent it to a series of record lows.

While companies are starting to boost hedging levels, the current proportion remains far below the minimum 63% recommended for periods of high foreign-exchange volatility, according to a central-bank study.

The rupee slid to a fresh all-time low of 80.0638 per dollar on Thursday, and has lost 2.4% over the past month, the third-worst performing Asian currency over the period. Global funds have offloaded $29.5 billion of Indian shares this year, on course for a record annual outflow, according to data compiled by Bloomberg data starting in 1999.

The increased demand for hedging by Indian companies is evident in the rise of dollar-rupee forward premiums, and the process is set to become a key source of depreciation pressure on the rupee, according to Citigroup Inc.

“Holders of external debt are likely to refinance their debt or repay from forex revenue sources,” Citi economists Samiran Chakraborty and Baqar Zaidi wrote in a research note this month. “That said, the increasingly aggressive US Fed tightening could raise the cost of external financing and along with a squeeze in global liquidity could pose some challenges to the large refinancing of external debt due this year.”

Citibank has lowered its 12-month forecast for the rupee to 81 per dollar from an earlier prediction of 79, the economists said.

One alternative to hedging overseas borrowing is to switch away from dollar funding altogether and seek cheaper domestic options.

“The company’s broader policy is to hedge the forex exposure as and when the need arises to protect the currency and interest-rate movement risk,” ReNew Power chief financial officer Kedar Upadhye said in an interview last week.

“Indian interest rates are much better compared to what we have to pay if we have to raise money in international markets,” said Seshagiri Rao, joint managing director at the company in Mumbai. “We did some overseas borrowings last year, and this year we will focus on domestic market.”