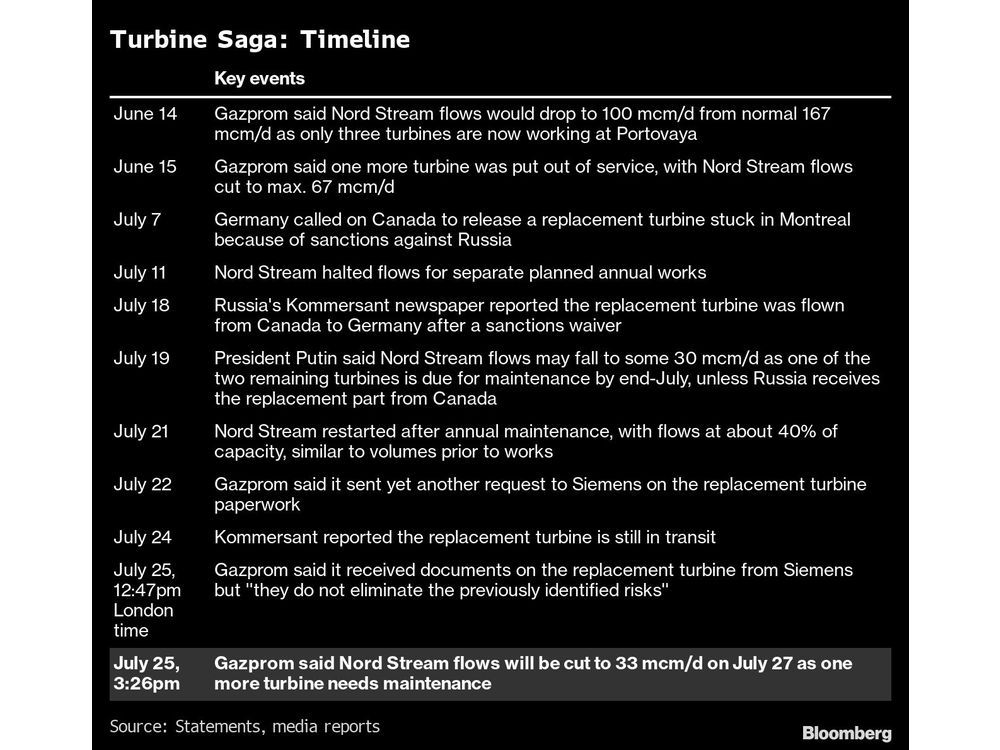 (Bloomberg) — German Chancellor Olaf Scholz said Russia is to blame for issues shipping a turbine for the key Nord Stream 1 pipeline that’s at the center of Europe’s gas crisis.

The component, which Gazprom PJSC has blamed for reduced deliveries, is ready, and there are no hurdles on Germany’s side, Scholz said Wednesday alongside the chief executive officer of turbine-maker Siemens Energy AG.

“What’s important to me is to make it clear that this turbine is ready for action at any time,” Scholz said. “There is nothing preventing it from being transported to Russia.”

The German chancellor traveled to Siemens Energy’s site in Muehlheim an der Ruhr in a sign of the growing tension with Russia over sanctions and the war in Ukraine. As Moscow reduces flows through Nord Stream, Europe’s largest economy faces an energy crunch this winter that could trigger a recession and prompt the state to ration gas.

The whereabouts of the turbine stoked political controversy in recent weeks as Russia claimed the component is needed to sustain gas exports to Europe, while Germany described their argument as a bluff.

The turbine had been sent to Canada for maintenance work at the Siemens Energy factory where it was built. It got temporarily stranded there because of sanctions imposed in the wake of Russia’s invasion of Ukraine. Canada decided to allow the transport to Germany, where it’s since been stuck waiting for go-ahead from Moscow.

Russian gas giant Gazprom has gradually reduced flows through the pipeline, citing technical issues and missing documents for the turbine. The most recent reduction leaves Nord Stream operating at about 20% of capacity.

Turbines installed at the gas giant’s Portovaya station on the Baltic coast power compressors, allowing gas to flow through the 1,200-kilometer (745-mile) subsea conduit to Germany. Each one is about 20 feet high, 15 feet wide and looks like an airplane engine.

When all are fully operational, Nord Stream can pump at least 55 billion cubic meters of gas a year to European consumers. In 2021, when actual volumes were even higher, it was enough to cover about 15% of the European Union’s total gas needs.

“There are no technical reasons” for reducing Nord Stream flows, Scholz said. “This turbine works.”