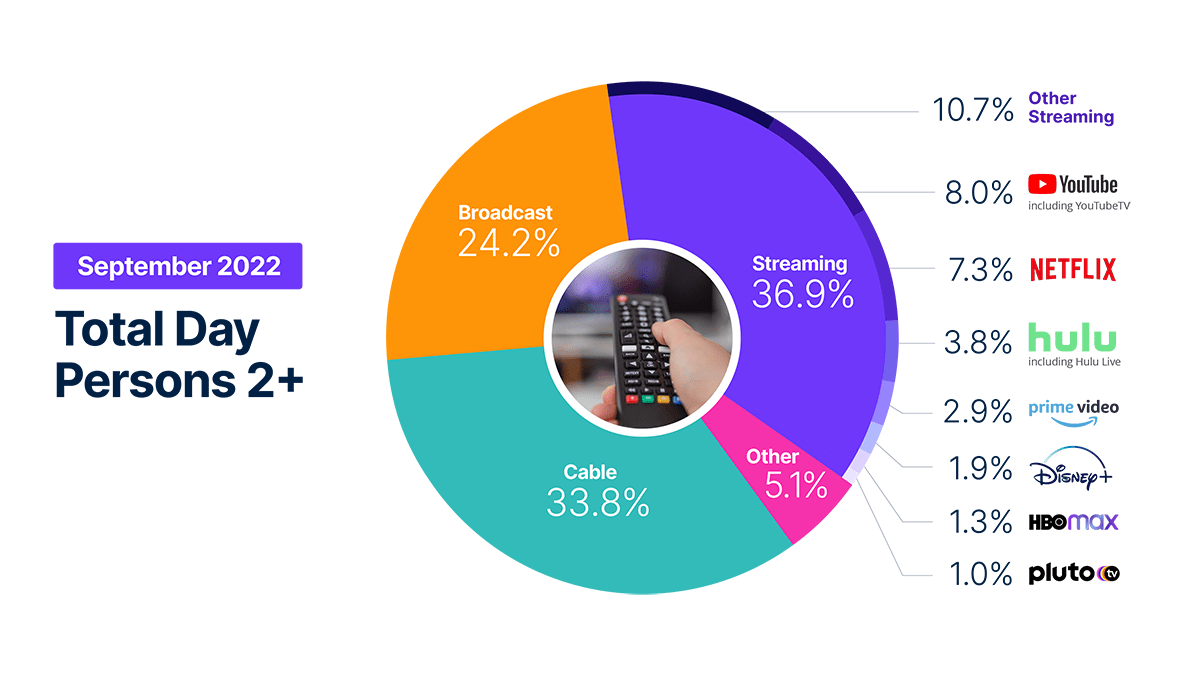 The return of the traditional fall television season meant that overall TV usage rose in September, and the share of TV time devoted to broadcast outlets got a boost, but streaming still maintained what looks like persistently steady gains as the top single use of a TV set.

Total viewing rose 2.4%, and broadcast viewing rose 12.4% from August – and broadcast increased its share of TV time to 24.2%, according to “The Gauge” from Nielsen, the ratings giant’s monthly overall look at TV delivery platforms.

But for a sixth straight month, streaming boosted its share of the TV-use pie – increasing in September to 36.9%. That built streaming’s lead on cable, which slipped to a 33.8% share. Broadcast, as mentioned, rose to 24.2%. And “Other” – a category that is heavily videogaming use but also includes viewing video discs – continued a back-to-school decline, falling to 5.1%.

Two months ago, streaming had surpassed cable to become the top single use of TV for the first time.

The fall season doesn’t just mean new network shows, but also the return of football, and sports viewing on broadcast jumped 222% overall, and made up just over 25% of all broadcast viewing.

Zooming in on streaming in particular shows a new king for September: YouTube/YouTube TV (NASDAQ:GOOG) (NASDAQ:GOOGL) displaced Netflix (NASDAQ:NFLX) as the leader, grabbing an 8% share of all TV usage as Netflix slipped to 7.3%.

Meanwhile, Paramount’s (PARA) (PARAA) free ad-supported offering Pluto TV made an entry at 1% of total TV time. “Other streaming” (including smaller services like Crackle (CSSE) as well as linear streamers like Spectrum (CHTR), DirecTV and Sling TV (DISH)) grew its share to 10.7% from 10.3%.

Turning to weekly streaming ratings, Netflix (NFLX) followed up two weeks of leading the charts with Cobra Kai by rolling out its next monster hit.

Monster: The Jeffrey Dahmer Story streamed 3.658B minutes in Nielsen’s most recent streaming ratings week (Sept. 19-25). That’s one of the biggest weeks for a streaming program ever, bested only by the likes of Stranger Things, Tiger King and Ozark (all Netflix shows as well).

Monster bumped Cobra Kai to No. 2 with 1.11B minutes streamed, where it still edged out twinned fantasy offerings House of the Dragon on HBO Max (WBD), with 1.008B minutes; and The Lord of the Rings: The Rings of Power on Amazon Prime Video (AMZN), with 977M minutes.