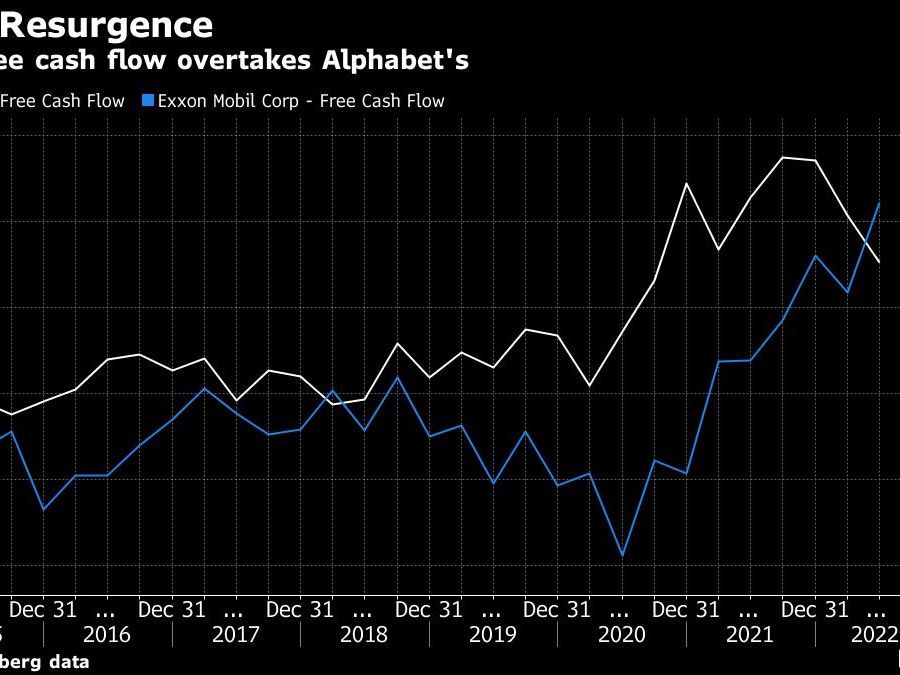 (Bloomberg) — Exxon Mobil Corp.’s cash haul overtook that of Alphabet Inc. for the first time since 2018, proving the oil giant is back in the big league just a year after suffering one of the biggest activist shareholder upsets in corporate history.

Exxon, which lost money for the first time in its history during the pandemic, now ranks as the S&P 500 Index’s third-largest generator of free cash flow, behind only Apple Inc. and Microsoft Corp, according to data compiled by Bloomberg.

In another sign of oil’s resurgence, Chevron Corp. jumped up in the ranks with a cash inflow that surprised analysts who were already expecting a record quarter.

It’s a trend that Jeff Currie, Goldman Sachs Group Inc.’s chief commodity strategist, calls the “revenge of the old economy.” Though accelerated by Russia’s invasion of Ukraine, the seeds of current energy rally were sewn by the investor preference for tech-stocks over commodities in the past decade, Currie says, leading to anemic investment in hard energy assets like mines, oil fields, and refineries.

As consumers feel the pinch of elevated fuel prices, oil explorers — especially those that prioritized crude and natural gas over renewables — are best-placed to benefit.

“Exxon and Chevron showed a good example of the scale of shareholder returns that they can generate at $100-a-barrel oil,” said Matt Murphy, a Calgary-based analyst at Tudor, Pickering, Holt & Co. “It will catch the radar of investors who are looking for some yield as we move deeper into the recessionary environment.”

Executives at both companies said they don’t see much evidence of fuel-demand destruction even as recession fears mount.

“I wouldn’t tell you that we’re seeing something that I would say, we are in a recession or near recession,” Exxon Chief Executive Officer Darren Woods said during a call with analysts.

Exxon, Chevron, Shell Plc and TotalEnergies SE all reported record profits this week. All of them expanded share buybacks except Exxon, which tripled repurchases earlier in the year.

It’s a stark reversal from much of the last decade when the sector was hammered for focusing on megaprojects, woeful financial performance and failing to advance the energy transition away fossil fuels.

Exxon is probably the best example of the turnaround. Just a year ago, its three biggest investors handed the board a damaging defeat in electing three new directors after an acrimonious activist campaign by Engine No. 1.

The US oil titan subsequently locked in capital spending at historically low levels and slashed costs, leaving it well-positioned to reap the benefits from soaring commodity prices. Exxon is up 58% this year.

Woods said his plan to lift production, panned by investors and environmentalists when it was announced in 2018, is now paying off because it built cash-generating assets. “I got a lot of pressure on this, and criticism, spending that money upfront,” he said. “I think that was the right strategy.”

Investors are starting to notice. The top 10 best performers in the S&P 500 Index are all energy companies and the sector now accounts for 4.5% of the index, more than double its pre-pandemic weighting. The 10 worst include former tech superstars Netflix Inc. and Meta Platforms Inc.

“We have record free cash flow yields across the entire old economy,” Currie said on Bloomberg TV last month. “We’ve favored short-cycle iPhones over copper mines for the last decade, and this is the shortages we’re ending up with.”