Marvell, with earnings on tap, may have seen ‘peak’ backlog as economy weakens 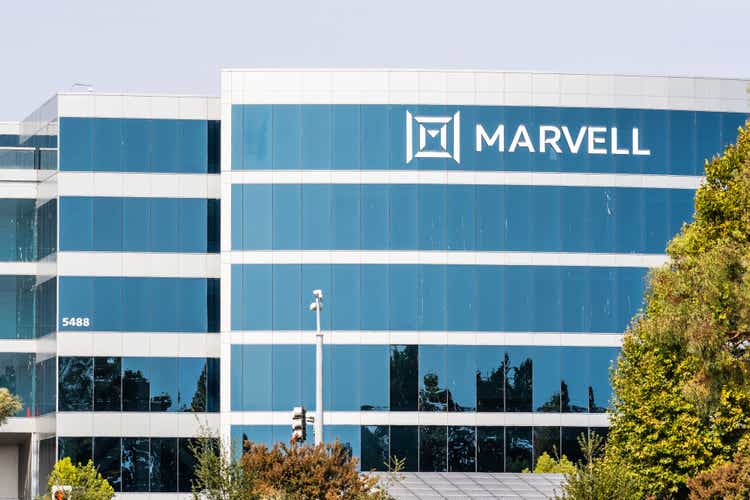 Marvell Technology (NASDAQ:MRVL) has benefited from the continued explosive growth in data center spending, along with several other trends such as 5G mobile technology.

But, it’s possible that its backlog may have peaked as the company gets set to report second-quarter results on August 25.

Wells Fargo analyst Gary Mobley, who has an equal weight rating and a $65-a-share price target on Marvell’s (MRVL) stock, noted that the company is “not immune” from macro challenges. And with peers such as Nvidia (NASDAQ:NVDA) and Micron Technology (NASDAQ:MU) recently talking about weakness in certain areas, the company’s backlog could start to show signs of softening.

Mobley said that like those other chipmakers, Marvell “may begin to see some slowdown in backlog growth” as inventories increase from low levels. However, Mobley noted that even though lead times are shrinking, demand is still likely to exceed supply for Marvell (MRVL).

Mobley noted that Marvell (MRVL), led by Chief Executive Matthew Murphy, is “well insulated” from consumer weakness, given that it generates the majority of its revenue from enterprise and datacenter spending, as well as the deployment of 5G networks.

And even though there is some concern that its backlog may have peaked, perhaps in the April or July quarter, the company is likely to benefit from this for some time, Mobley explained.

“As incremental capacity is coming online to help monetize [Marvell’s] record high backlog,” Mobley said. “The key question moving forward will be if [Marvell] can exit [its 2023 fiscal year] with backlog higher than at the start to the [fiscal year].”

Mobley noted that there has been “softness” in the storage controller integrated circuit market, as well as the end market for data centers, but Marvell (MRVL) could “live off” this backlog for a period of time and even post sequential growth for at least the next quarters.

Beyond that, though, investors will need to “see how short and shallow the current macro softness may be,” Mobley pointed out.

Nonetheless, it looks as if Marvell (MRVL) is viewed as a “relative safe haven” in the semiconductor industry, Mobley pointed out, as evidenced by its shares trading at 21 times the next 12 months earnings.

At this point, it’s unclear how long the economic weakness could last, but once the global economy is on firmer footing again, Marvell (MRVL) is likely to continue reaping the benefits, as 5G networks continue to grow and hyperscalers such as Amazon (AMZN), Google (GOOG) (GOOGL) and Microsoft (MSFT) continue to build out their cloud computing proficiencies, Mobley said.