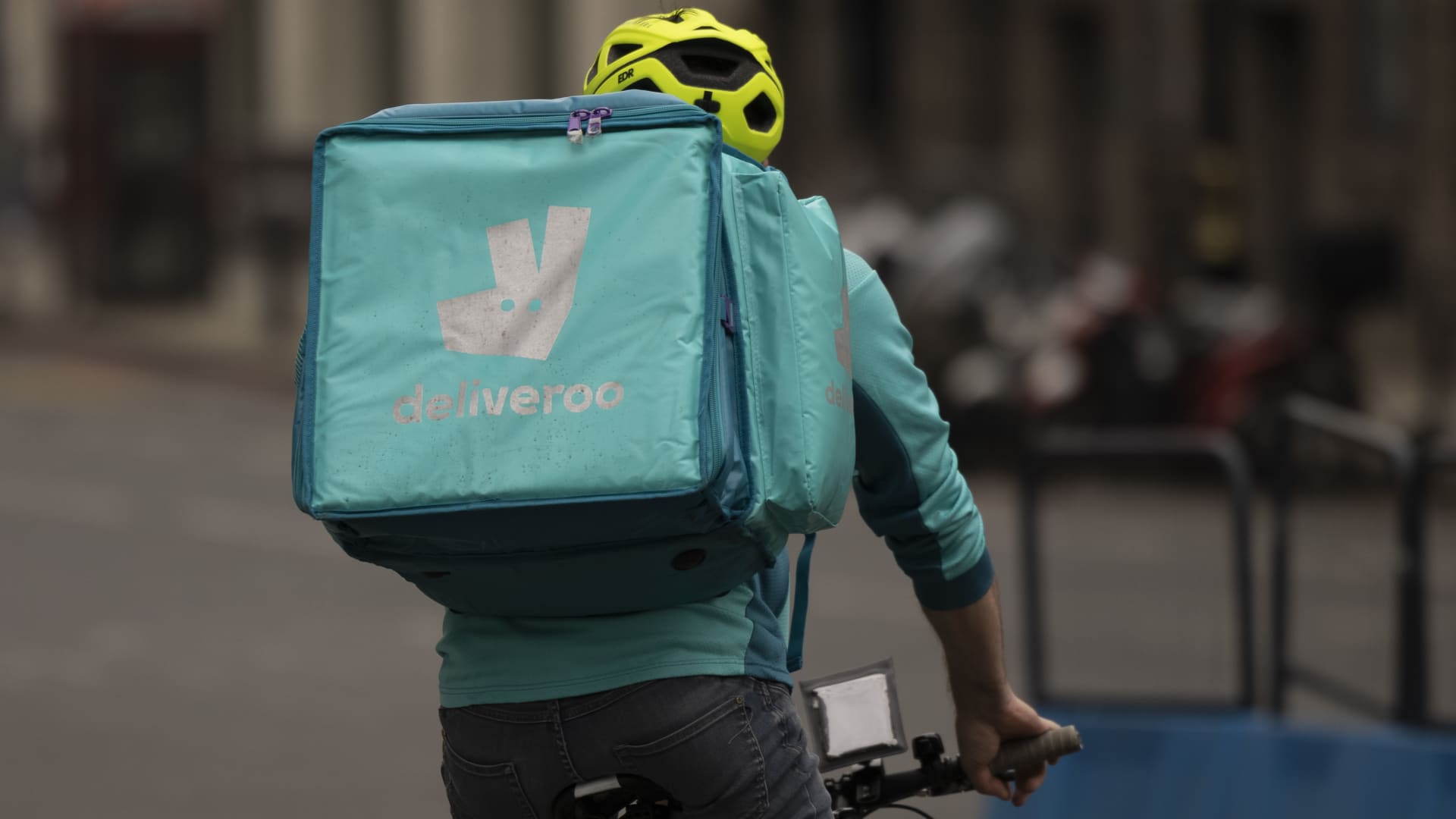 A Deliveroo rider near Victoria station on March 31, 2021 in London, England.

Losses at British meal delivery firm Deliveroo swelled in the first half of 2022 while revenue growth slowed dramatically, as the disappearance of pandemic restrictions and a rise in the cost of living dented demand for online takeout.

Deliveroo reported a pretax loss of £147.3 million ($178 million) in the first six months of the year, up 54% from the same period a year ago. The losses were driven mainly by increasing spending on marketing and overheads.

Revenues at the company climbed 12% to £1 billion. That was much slower than the revenue growth that the firm reported in the first half of 2021 when sales climbed 82% year-on-year.

Deliveroo’s gross transaction value — which measures overall sales on the platform — grew 7% to £3.6 billion, lackluster growth compared to last year when GTV doubled in the first half. The company blamed the disappointing performance on “challenging market conditions.”

Deliveroo said it is consulting on plans to exit the Netherlands, which would mark the latest exit from a major European market for the company.

The firm, which faces the prospect of much stricter gig economy laws in the European Union, previously retreated from Spain last year and Germany in 2019.

The Netherlands represented only 1% of Deliveroo’s GTV in the first half of 2022, Deliveroo said.

Deliveroo reiterated its guidance for full-year sales growth. Last month, the company revised its target for 2022 GTV growth to a range of 4% to 12%, down from a previous forecast of between 15% and 25%.

Shares of Deliveroo climbed 3% on Wednesday following its results.

“So far in 2022, we have made good progress delivering on our profitability plan, despite increased consumer headwinds and slowing growth during the period,” Deliveroo CEO Will Shu said in a statement.

“We are confident that in H2 2022 and beyond we will see further gains from actions already taken, as well as benefits from new initiatives.”

Shu added: “We remain confident in our ability to adapt financially to any further changes in the macroeconomic environment.”

The food delivery market has been gripped by the twin challenges of rising inflation and a more outgoing consumer.

People are spending more time dining in restaurants physically as opposed to ordering online while soaring costs for energy and essential goods have made shoppers more cautious about how they part with their cash.

Separately Wednesday, Deliveroo said it would initiate its first-ever stock buyback program, purchasing up to £75 million worth of shares from investors. The purpose of the program is “to mitigate dilution from share-based compensation plans,” Deliveroo said.

The company announced that Simon Wolfson, CEO of U.K. clothing retailer Next, had decided to step down from its board.

“After much consideration, and with regret, I believe that the time required to continue in my role at Deliveroo is no longer compatible with my executive and other commitments,” Wolfson said.

Deliveroo, which recently added McDonald’s to its platform as part of a global partnership, is hoping a focus on other areas of on-demand delivery will help it weather the storm of a possible recession. The firm has signed up non-food retailers such as WH Smith and LloydsPharmacy.

Food delivery has long been a tough market, with thin margins and plenty of competition making it harder for any single player to achieve significant success. While the Covid-19 lockdowns were a boon to several firms in the space, the market has seen growing consolidation lately as valuations slump on falling demand for such services.

Last week, Anglo-Dutch firm Just Eat Takeaway.com wrote down the value of its U.S. subsidiary Grubhub by $3 billion, almost half the $7.3bn that it paid for the firm last year. The company is exploring a sale of Grubhub, among other options, amid pressure from investors to improve its business.

It comes after Amazon announced a deal to take a stake in Grubhub and add food delivery perks to its Prime membership program. Amazon has similar arrangements in place with Deliveroo in the U.K., Italy, France and the United Arab Emirates.