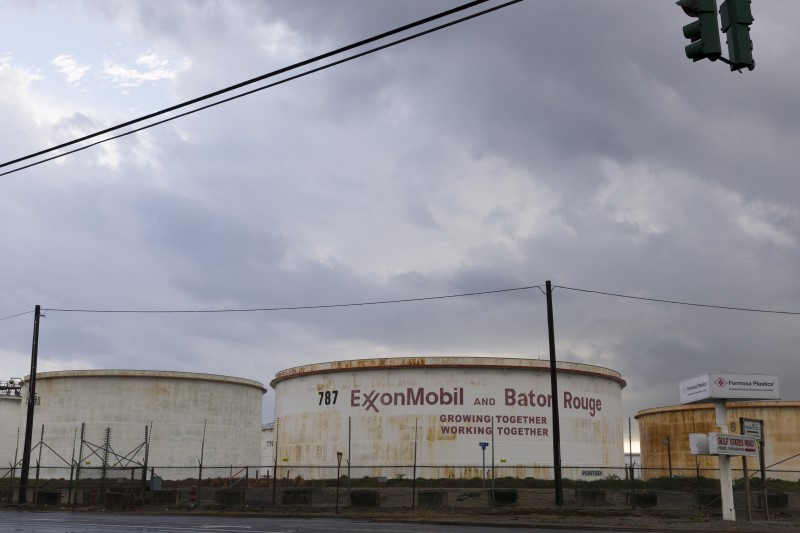 © Reuters. Exxon Mobil logo and stock graph are seen through a magnifier displayed in this illustration taken September 4, 2022. REUTERS/Dado Ruvic/Illustration

LONDON (Reuters) – Shell (LON:) and Exxon Mobil (NYSE:) have put up for sale one of Europe’s largest and oldest production ventures, betting on soaring energy prices amid tensions with Russia to attract buyers, according to a document and industry sources.

The top two Western energy giants could raise over $1 billion from the sale of the 50-50 NAM joint venture in the Netherlands, two industry sources said.

It would be part of both companies’ efforts to shed ageing assets that are no longer central to their operations.

Shell and Exxon recently launched the sale process for NAM’s offshore gas operations, which include dozens of fields and around 20 offshore platforms, as well as a network of pipelines and three processing plants, according to the document and sources.

NAM started producing natural gas in 1963 following the discovery of the giant Groningen field and has been a major source of gas for the Netherlands and Europe for decades.

Its output has nevertheless been in a steady decline since 2014 and is set to fall further in the coming years after the Dutch government decided to shut Groningen in order to limit seismic risk in the region. The field is expected to shut down in 2023 or 2024 but its life could be extended, the government has said.

The offshore and onshore NAM assets up for sale produced around 2.4 million cubic metres per day of natural gas in 2021 and have potential to increase output to 2.8 mcm per day with further investment, according to the document.

The joint venture, however, includes several late-life assets that require large spending for dismantling and clean-up operations once they are shut down, the sources said.

The package of assets also includes NAM’s stakes in three gas processing plants in the Den Helder Terminal in which 53% of all gas produced in the Dutch offshore is processed, as well as stakes in several pipeline networks.

The assets are estimated to be worth between $1 billion and $1.5 billion, sources said.

Assigning a value to such assets has become tricky in recent months amid huge fluctuations in long-term natural gas prices after Russia, Europe’s main gas supplier, restricted exports to the region in response to Western sanctions on Moscow following its invasion of Ukraine in February.

Still, Shell and Exxon hope that Europe’s growing focus on its domestic energy production will attract interest in the NAM joint venture, the sources said.

NAM said in October 2021 that it aims to sell its oil and gas fields in the Netherlands in the coming years following the government’s decision to shut down the Groningen field.