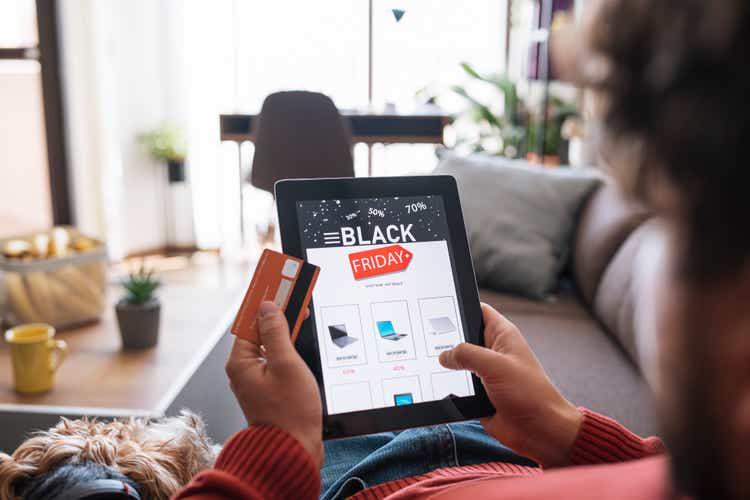 While traffic to malls may have been thinner than expected according to Reuters, web traffic remained robust. According to Adobe Analytics, shoppers in the US spent a record $9.12B on Black Friday sales online*.

The record sales figure came amid deep discounting among many major retailers as the likes of Target (NYSE:TGT), Kohl’s (KSS), and more work through bloated inventory levels. Many retailers have been pursuing discounts earlier than ever due to inventory issues.

The 2.3% jump in online sales from the prior year more than doubled the expectation for the analytics provider. Additionally, Cyber Monday sales are expected to exceed the performance on Black Friday, adding to strength in the e-commerce industry.

The strong data from Adobe adds to a positive report from Shopify (SHOP). In a report released on Saturday morning, the Canadian e-commerce company said $3.36B was spent by consumers on the major shopping holiday, up 17% from the prior year. The peak hour for sales was around noon eastern time, wherein merchants on the platform saw $3.5M in sales per minute. The apparel, beauty, and home and garden categories led sales, according to Shopify as the average cart held about $102.31 worth of goods.

The strength in e-commerce has pushed past expectations set by data providers such as Mastercard’s (MA) SpendingPulse, which had projected in-store sales to accelerate past online sales in the post-pandemic environment. The credit card provider had forecast a 15% jump in sales on Black Friday overall, led by an 18% rise for in-store retail sales. Department stores like Macy’s (M), Dillard’s (DDS), Nordstrom (JWN), and Kohl’s (KSS) were forecast to be some of the main drivers with year-over-year sales projected to rise over 25% amid a return of in-person shoppers seeking the aforementioned discounts.

“While retailers have already been heavily discounting this season, consumers and retailers are likely holding out for some special offers to land on the biggest promotional day of the year,” Steve Sadove, senior advisor for Mastercard (MA), commented.

Actual results reflected a 12% rise in in-store sales and a 14% jump in e-commerce sales, below the initial forecast. Apparel sales were cited as a particular area of strength for bargain hunting consumers. 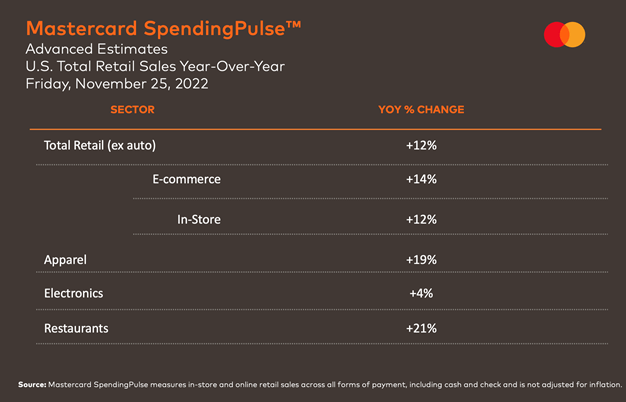 “With holiday promotions kicking off long before the Thanksgiving weekend, consumers have been shopping strategically for the season’s best deals,” said Michelle Meyer, North America Chief Economist, Mastercard Economics Institute. “Retailers delivered on Black Friday with deals that enticed consumers to fill their carts despite the inflationary environment.”

“As we expected, Black Friday deals and the in-store experience attracted shoppers, resulting in a solid turnout this year,” said Brian Field, global leader of retail consulting and analytics at Sensormatic Solutions. “The pandemic-driven trend of shopping in unenclosed shopping centers has endured and malls are seeing resurgence as well. Our data shows consumers continue to enjoy the benefits of the brick-and-mortar shopping.”

Yet, 2021 in-store sales were noted as down 28.3% from 2019 levels. As such, enthusiasm on the modest improvement year over year is somewhat dulled in a fuller context.

In terms of discounts enticing customers to shop, Adobe data indicates that it is indeed the steep sales that are a key factor in driving sales to a year over year gain despite the inflationary pressure on consumers. Namely, electronics sales and toys were scooped up by shoppers that could not deny the discounts.

According to the NRF, toys like American Girl and Barbie dolls from Mattel (MAT) are top purchases for girls. Meanwhile, video games like ActivisionBlizzard’s (ATVI) Modern Warfare II and consoles like Microsoft’s (MSFT) Xbox and Sony’s (SONY) PlayStation dominate purchases for boys. Roblox (RBLX) was also cited as a top purchase on Thanksgiving Day by Adobe, which noted that sales on the Thanksgiving holiday itself also touched a record $5.29B.

Per Captify, an advertising technology company, consumers were well aware of the rampant discounting in the retail space and actively sought out these deals. As such, the selection of sites to target shifted from the prior year. The firm said that Walmart (WMT) usurped Amazon (AMZN) as the most-searched retailer for Black Friday deals. In fact, both Target (TGT) and Kohl’s Corporation (KSS) jumped ahead of Amazon in the search rankings as well.

Read more on how cold weather could carry robust retail sales through to Christmas.