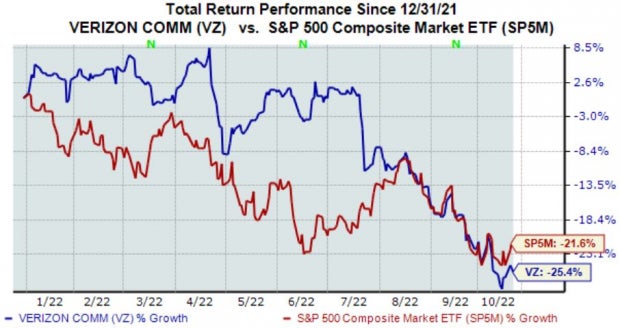 Earnings season is in full gear now, and investors are more than anxious for companies to unveil what has transpired behind the scenes.

It’s been a better-than-expected earnings season so far, with the “earnings apocalypse” yet to materialize. Still, earnings estimates fell notably over the last several months.

A giant in the wireless realm, Verizon Communications VZ, is gearing up to report earnings on October 21st before the market open.

Currently, the communications titan carries a Zacks Rank #3 (Hold) paired with an overall VGM Score of a B.

How does everything else stack up for the company heading into the release? Let’s take a closer look.

Year-to-date, it’s been rough sailing for VZ shares, down more than 25% and lagging behind the S&P 500.

Over the last three months, the story has remained the same; VZ shares have widely underperformed the S&P 500, down nearly 24%. 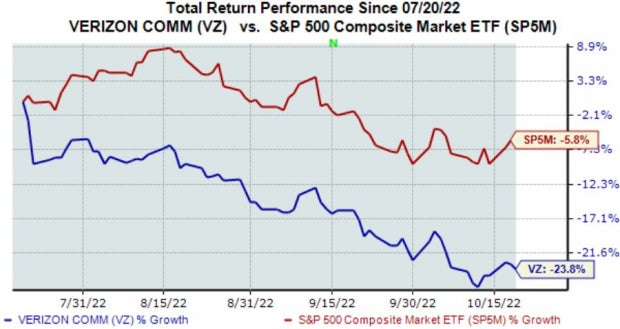 Still, VZ shares are cheap; shares trade at a 7.2X forward earnings multiple, nowhere near the five-year median of 11.6X and representing a sizable 58% discount relative to the S&P 500.

The company sports a Style Score of an A for Value.

Analysts have primarily been bearish in their earnings outlook, with three negative estimate revisions coming in over the last several months. The Zacks Consensus EPS Estimate of $1.28 reflects a 9% decline in earnings Y/Y.

However, the company’s top-line is in much better shape – the Zacks Consensus Sales Estimate of $33.8 billion suggests Y/Y revenue growth of nearly 3%.

Verizon has consistently exceeded earnings estimates, penciling in eight EPS beats across its last ten quarters. In its latest print, however, the company fell short of earnings expectations by roughly 2%.

Top-line results have also been consistently strong, with VZ registering seven revenue beats over its last ten reported quarters. Below is a chart illustrating the company’s revenue on a quarterly basis.

Additionally, it’s worth highlighting that shares have moved downwards following each of VZ’s last three quarterly reports, all by at least 3.5%.

VZ shares have lagged behind the general market across several timeframes in 2022, indicating that bears have pushed bulls out of the arena.

Shares are relatively cheap, with the company’s forward earnings multiple residing well beneath its five-year median.

Analysts have been primarily bearish within their earnings outlook, and estimates suggest a Y/Y decline in earnings but an uptick in revenue.

Further, the company has consistently exceeded quarterly estimates, but the market hasn’t responded well across its last three prints.

Heading into the release, Verizon Communications VZ carries a Zacks Rank #3 (Hold) with an Earnings ESP Score of 0.7%.

7 Best Stocks for the Next 30 Days

Since 1988, the full list has beaten the market more than 2X over with an average gain of +24.8% per year. So be sure to give these hand-picked 7 your immediate attention. See them now >>