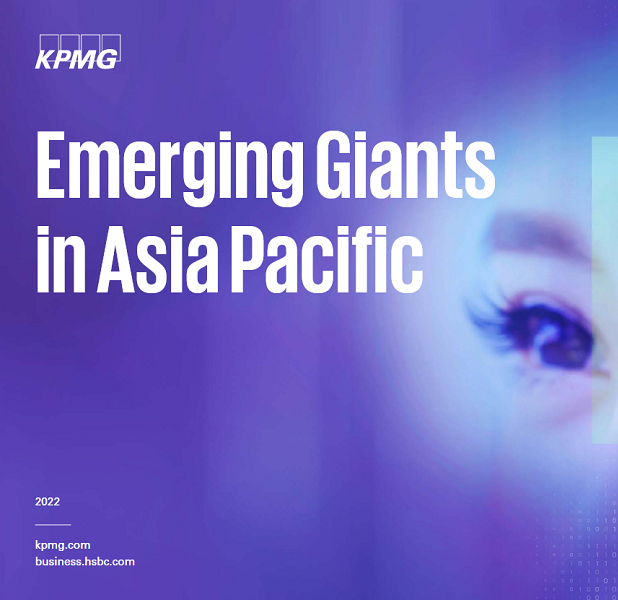 KPMG and HSBC have released the Emerging Giants in Asia Pacific report, which examines new economy businesses across the region with strong potential to impact the global business landscape over the next decade. Over 6,472 technology-focused start-ups[1] with valuations of up to US$500 million[2] were studied across 12 markets, with ten leading Emerging Giant companies identified in each market[3]. The report also names 100 Leading Emerging Giants within the overall Asia Pacific region.

Maturing technology-focused ecosystems in the Asia Pacific are producing billion-dollar companies at a rapid rate. With the International Monetary Fund predicting that the region’s emerging markets and developing economies will grow 20 percent faster than the global average[4], this year, Emerging Giants – fast-growing, influential and innovative start-ups with unicorn ambitions – are a leading indicator of the Asia Pacific’s growth trajectory.

According to the report, the emergence of new sector verticals is attracting record-breaking investments, leading to a proliferation of larger, more valuable start-ups in the region.

Beyond the traditional sectors associated with new economy businesses such as FinTech or software-as-a-service, the report identified around 120 technology-related industry subsectors among these businesses, with blockchain, smart city, and sustainability and ESG verticals being most prominent. Additionally, six out of the 12 markets studied had average valuations of US$300 million or more among their leading Emerging Giants[5].

“Fast-growing technology start-ups are the new wave of SMEs contributing towards economic growth and more. Looking ahead, the global push towards carbon-neutrality will be a major driver of innovation as traditional sectors go green, and Emerging Giants will likely play a key role in developing the technologies that can reduce carbon emissions and promote more responsible stewardship of the environment.  Asia will be a crucial battleground in the fight for a more sustainable future,” said Honson To, Chairman KPMG Asia Pacific and KPMG China.

“Emerging Giants in Asia Pacific excites us because we see the start-up ecosystem as complimentary to the established end of the financial services industry: they’re a source of innovation, and invigorate both local and regional economies with their dynamism,” added Surendra Rosha, Co-Chief Executive of HSBC Asia-Pacific.

Other key findings of the report include:

“As the world’s leading trade bank, we’re always looking for ways to help our customers innovate, develop the solutions of the future and add value. As up-and-coming leaders who will shape industries in the next decade, Emerging Giants represent a vital building block for a sustainable and prosperous future for the region,” said Dan Roberts, HSBC’s Global Head of Business Banking.

“Asia Pacific’s emerging giants are bold, ambitious and cutting-edge in the new platform and software applications they are offering. They are courageous about who they choose to partner with, which markets they are targeting, how they shape their business models, transforming company culture and mission statements. Perhaps most importantly, they are transforming and pioneering the technology landscape over the coming years, in addition to thinking about what is useful to their customers now,” added Darren Yong, Head of Technology, Media and Telecommunications, KPMG Asia Pacific.

The report also features interviews with start-up founders and executives across the 12 Asia Pacific markets, which offer insight into the challenges and opportunities that start-ups in the region face.

The Emerging Giants in Asia Pacific report can be downloaded at:

[3] Consideration for these lists was based on estimated valuations and venture capital received based on Pitchbook data figures; as well as KPMG and HSBC analysis on the future growth potential of these companies.