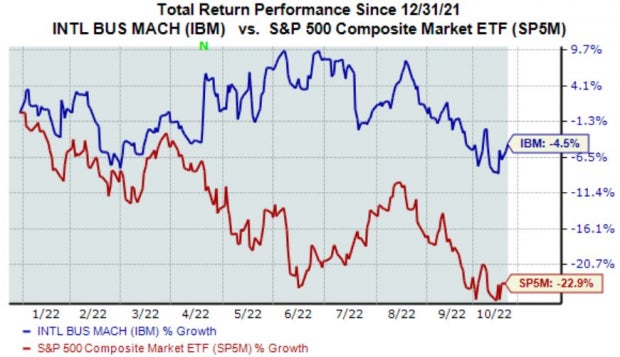 The Zacks Computer and Technology sector has been hit hard in 2022 amid a Fed pivot to a hawkish nature, with geopolitical issues and lingering COVID-19 uncertainties also spoiling the fun.

A widely recognized company in the sector, International Business Machines IBM, is on deck to unveil quarterly results on October 19th after the market close.

International Business Machines has gradually evolved as a provider of cloud and data platforms, with its Red Hat acquisition strengthening its position in the hybrid cloud market.

Currently, the company carries a Zacks Rank #4 (Sell) paired with an overall VGM Score of a D.

How does everything else shape up heading into the report? Let’s take a closer look.

Over the last three months, the picture remains the same; IBM shares have declined 4.8%, easily outperforming the general market’s decline of nearly 7%. 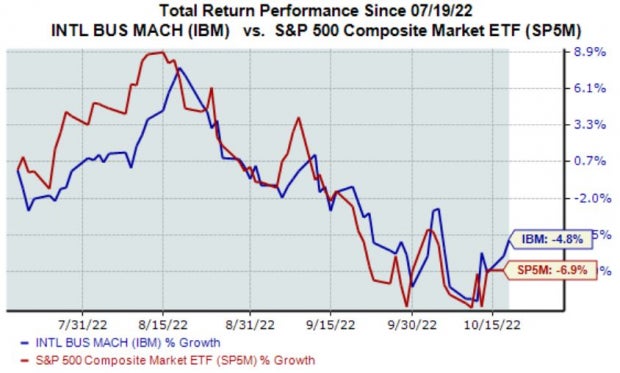 IBM shares trade at a 13.0X forward earnings multiple, reflecting a 22% discount relative to the S&P 500 but sitting above the five-year median of 11.1X.

Further, IBM carries a Style Score of a C for Value.

A singular analyst has lowered their earnings outlook for the quarter, with the Consensus Estimate Trend retracing marginally. The Zacks Consensus EPS Estimate of $1.78 suggests a Y/Y decline in earnings of roughly 30%.

IBM’s top-line appears to be undergoing some turbulence as well; the Zacks Consensus Sales Estimate of $13.7 billion for the quarter reflects a 22% decline from year-ago quarterly sales of $17.6 billion.

IBM has consistently exceeded earnings estimates, beating out the Zacks Consensus EPS Estimate in nine of its last ten quarters. Just in its latest print, the company penciled in a marginal 0.9% bottom-line beat.

Revenue results have also been primarily strong, with the company exceeding top-line estimates in six of its last ten quarters. Below is a chart illustrating the company’s revenue on a quarterly basis.

Further, the market has had mixed reactions in response to the company’s quarterly prints as of late, with shares moving downwards twice and upwards twice following its last four earnings releases.

IBM shares have outperformed the general market across multiple timeframes in 2022, telling us buyers have defended them at a higher level than most.

The company’s valuation multiples may be considered a bit steep, with its forward P/E ratio sitting above its five-year median.

A singular analyst has lowered their earnings outlook for the quarter, with estimates suggesting Y/Y declines in both revenue and earnings.

Further, the company has primarily exceeded quarterly estimates, with the market having mixed reactions following its last four prints.

Heading into the release, International Business Machines IBM carries a Zacks Rank #4 (Sell) with an Earnings ESP Score of -6.4%.

For several months now, electric vehicles have been disrupting the $82 billion automotive industry. And that disruption is only getting bigger thanks to sky-high gas prices. Even titans in the financial industry including George Soros, Jeff Bezos, and Ray Dalio have invested in this unstoppable wave. You don’t want to be sitting on your hands while EV stocks break out and climb to new highs. In a new free report, Zacks is revealing the top 5 EV stocks for investors. Next year, don’t look back on today wishing you had taken advantage of this opportunity.>>Send me my free report revealing the top 5 EV stocks