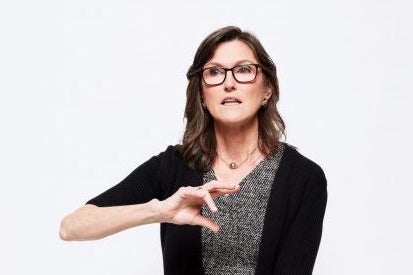 Cathie Wood, the founder of ARK Investment Management, reiterated her belief that the U.S. Federal Reserve is making unanimous decisions based on lagging indicators — employment and headline inflation — despite significant price deflation in the pipeline.

Wood has been a strong critic of the central bank’s actions as the Federal Reserve continues with its aggressive path to rein in inflation despite many pointing to signs that it is slowing down.

Wood’s Thesis: “Compared to [Paul] Volcker’s 2-fold increase from 10% to 20% in the early eighties, Powell has raised the Fed Funds Rate 13-fold from 0.25% to 3.25%. In contrast to the Volcker Fed that battled inflation that had been building for 15 years, the Fed today seems to be responding to COVID-related supply shocks that surfaced in little more than 15 months,” Wood said in Ark’s third-quarter report.

Wood’s comparison was an extension of what she explained in a series of tweets last month, in which she said the current policy action was akin to using a “sledgehammer.”

Wood also said the combination of geopolitical forces and inventory hoarding has pushed U.S. consumer price inflation — a lagging indicator — to 8.2% on a year-over-year basis, “a rate that we believe deflationary forces — good, bad, and cyclical — are beginning to unwind.”

On Inventories: Wood also explained how the U.S. economy has contracted, inventories have piled up, and long-term inflation fears are overblown.

“Walmart Inc WMT and Target Corporation TGT continue to struggle with inventory build-ups that surfaced in the April quarter, while Nike Inc NKE reported a 44% year-over-year inventory increase as revenue growth hobbled along at a 3.6% rate in the August quarter,” she said.

To attract cautious consumers and clear bloated inventories, retailers could have to slash prices during the holiday season, she said.

On Innovation: Wood also pointed out how several mega-cap stocks seem to have lured risk-averse, benchmark-sensitive investors into crowded trades and away from emerging growth opportunities centered on disruptive innovation. “They could be missing investment opportunities like the next Amazon.com, Inc. AMZN, Apple Inc AAPL, or Tesla, companies that invested aggressively at the expense of short-term profits,” she said.

Read Next: Cathie Wood Remains Skeptical Of Auto Debt: ‘Decline In Used Car Prices Could Be Worse If…’